Yeeeeeaaaah! I am still amped after the show. It was totally fricking awesome! I am impressed at Hayley -- she literally doesn't stop moving for the ENTIRE show. The only bad thing was that I got separated from my friend who happened to be holding onto my camera - so I have absolutely NO video footage or photos. I'm a little upset but I have the memory in my head!

I don't remember the exact order of the setlist, but they played: Ignorance, Brick by Boring Brick, Careful, Crushcrushcrush, Decode, Emergency, Feeling Sorry, For a Pessimist I'm Pretty Optimistic, Let the Flames Begin (they played this instead of My Heart, which made me sad, but holy sh*t it was amazing), Looking Up, Misery Business (which they pulled a kid on stage to sing with her on and also blew confetti EVERYWHERE), Misguided Ghost (acoustic), Playing God, Pressure, That's What You Get, The Only Exception, When It Rains (acoustic), Where the Lines Overlap (acoustic) and a Loretta Lynn song that I'm not sure of the name of.

Overall, great night even though I got no pics :( that does admittedly make me sad.

Anyway, onto the makeups! 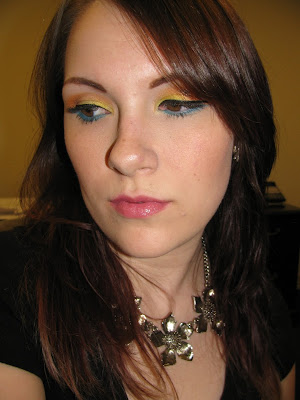 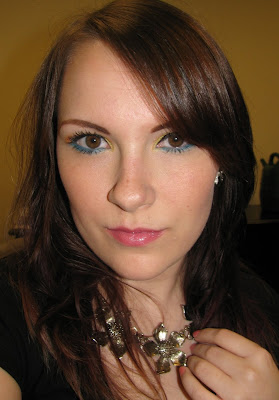 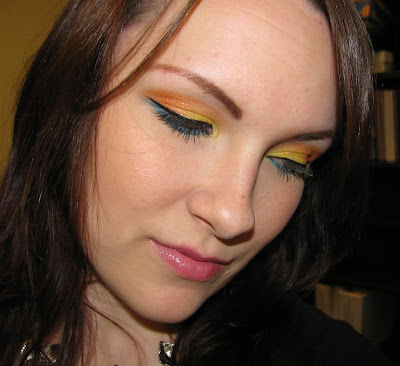 So, funny story... I put on just mascara in the morning for work since I was going to be doing this afterwards, before the concert (at my work). I totally forgot any eye brushes. So this was done... with my fingers. Yes, I was THAT determined. I think it came out pretty awesome even though I couldn't blend out the orange at the top. It stayed put all night too! The blue underneath faded just a little, but for how hot and sweaty I was, it was good!

I used NYX Jumbo Pencil in Milk as a base, then Beauty from the Earth's Lemon over top, then Electro-Koi from Fyrinnae (orange). Underneath is Zingy from Mac. I used Maybelline's Ultra Liquid Liner for my top liner. On cheeks is Stereo Rose, and on my lips is Boots lipstick in Rose Bud with NYX Chandelier gloss over top.

Graaaargghhh it was so awesome. That's it for today, guys! I'll be back tomorrow with my Dare to Wear haul.
Posted by Cydonian at 7:34 PM