I did 5 minute makeup for once! Well... not including my brows. I take ages to do them.

Today is me and my boyfriend's 1 year anniversary. So I spent the day talking online to him, though a few months ago we fully expected to be together by this time. I spent so much time that my mom sorta said oh yeah, btw, your brother will be here in a few and I had NO makeup on. So that's where this came from.

The next part is sort of personal -- and I know not everyone wants to read sappy things, so you're free to scroll to the photos (I'll put them above the product listing so that you can tell where the FOTD starts).

After nearly 9 months in the blogging community -- I want to blog about how I met Rob and well, how he's changed my life. I had never really been in a good relationship... I had nice boys that I dated, but it took me a long time to realize that a nice guy doesn't necessarily make a nice boyfriend. I got into serious relationship after serious relationship... one that got too serious for our age; then the next was too long distance and neither of us had the funds to support it; the next was the most serious of them, and that one just... fell apart, literally; and the most recent was another situation where I thought that a good person meant being good in a relationship, and that one I clung onto for years thinking he would change.

I'm not a romantic person -- sure, I've watched romance movies and been happy, or saw people hugging on the street and been able to smile -- but I've never felt romance for another person.

I had known Rob for quite a few years, through the "fell apart" relationship. He was friends with my ex, specifically, they developed an online game together. I play some games myself, so we all ended up playing Guild Wars together (before it went to crap, but I digress...). I had insomnia issues then, and I would sometimes get up in the middle of the night and play, and Rob would be one of the only ones online to play with, so we would. You start talking through that, start sharing beliefs and develop a friendship. When things with the ex went south, very south, he went on a literal crusade on our guild trying to convince them that I was the worst person in the entire world. I was basically booted out and left with Rob, and two other guys that I recruited in the first place, who stood by me.

Years went by... I had stopped playing, lost contact with all 3 of them. Rob and I occasionally emailed; and immediately after the break-up, he had let me vent (more like sob profusely) on him about what he had done to me. I think about 3 1/2 years had passed, with little more than a handful of emails back and forth, awkward messages about how life was. I hadn't contacted him in at least a year and I searched for his email, found it, and contacted him. I also remembered his last name and found him on Facebook. He accepted pretty quickly and messaged me on FB chat right away.

(God, this is getting verbose, I'm sorry!)

After a few days of steadily talking, and me venting about my relationship (I was living with a guy who had no idea how to be with me), I asked him if I could come visit him just to get away for a few days, and to figure out what I was going to do about the boyfriend. He agreed... I ended up breaking up with the boyfriend prior to going over there (it wasn't messy, at all, most emotionless breakup ever). So I went over with a sort of clear conscience.

8 hour plane flight, nerves, exhaustion (I didn't sleep the night before)... yet I still remember coming out of the arrivals part of Gatwick. You know how movies show those slow motion scenes that you go, psssh, that's never real! No one does that! Yeah. It happened to me. I came out and looked around, saw him, and it was like my entire world tilted for a few seconds. He was smiling (and wearing a light pink shirt) and I went up thinking to myself, "shit, what have I done? I'm in a foreign country for someone I don't know."

I spent the entire car ride to Chatham feeling nauseous, the gravity of what I had done was really setting in. I kept looking at him during the car ride -- it was wondering if he was real?

He was, we got back to his apartment to kill time before my hotel room was ready. I think check in was 11? It was 10... I wanted to rip my contacts out of my eyes as it was going on hour 17 of wearing them, and I couldn't find my case. Awkward, awkward moments in his apartment... he paced the entire time. I don't think he knew what to do with me. Here's this American girl, who's gone and flown 3,800 miles for him. Yeah, I was a bit mindblown as well.

We walked into town looking for a place to buy my contacts case, and I realized once we got into the Pentagon that he had been holding my hand for at least 10 minutes. What? When did THAT happen and oh god... sick feeling again. I was also being overwhelmed with all of the accents around me -- I had never been to a foreign country, it was a bit of a culture shock for me. I remember going into the bathroom and splashing water on my face for a few minutes, sure that I was going to throw up.

But when I would go back to him and let myself go, and just be around him, it would go away you know? It would feel normal and natural, effortless. We made our way to my room, I wanted to shower as I felt disgusting (and felt odd doing it as his place) and take a nap. I'm having memory failure issues at the moment -- but I think he asked if I wanted him to go. I didn't. I forgot to mention that my cell phone didn't work, even though my phone company told me it would. I didn't want to be left alone in a strange place. So I showered and took my nap, and we again had one of those movie moments. The first time we cuddled -- how many people remember that about their significant other? He wasn't even my significant other at that point -- but in the span of 4 hours, he had made such an impact in my head. I slept better than I have in a long time, I remember clicking the alarm off easily 7 or 8 times (it was broad daylight for him, I feel bad for him being stuck there with his arm under me).

We went out shopping for a bit, and came back to my room to get ready to go out clubbing for the evening with another couple. At this point he had kissed me, but not much, I don't think he wanted to push it. You can imagine my shock when, sitting in a chair next to the window of my unairconditioned hotel room (yes, I just made that a word), he told me that he was in love with me.

7 hours into really knowing me...

This is crazy, I thought to myself. This really cannot be happening?

He left to get ready at his apartment, and I honestly wondered for a while if he would come back. He took longer than I expected as he had to walk back a few times (I was about 15 minutes from his apartment) so I half-heartedly got ready, fully expecting that this boy wouldn't come back.

But he did... and we spent 3 amazing days together. I should have made the trip longer.

On my last night there, over wine and dinner, he asked me if I wanted to be with him. Basically, instead of doing this weird together-but-not thing we had been doing for over a month. (We used to do the heart symbol with our hands on webcam before we met in person, neither of us wanted to say the words). I had some things to figure out internally before I could say yes.

I flew home on July 1st with no idea of whether or not I would see him again -- whether I could. Could I keep a long distance relationship like this going? 3,800 miles is a lot of distance. But on the flight home, I realized that the emotional connection was already there, read "I was in love with him", and I couldn't just let go of it. "I've got a tight grip on reality but I can't let go of what's in front of me here."

3,800 miles of distance, and very little probability of it working.
He asked me again on July 4th, last year... and that time, I wasn't unsure or scared... I was positive of my choice. I said yes, and we've been together ever since. When trying to explain to my mom what was going on, she didn't understand until I told her "You know how you always told me I would just know, well guess what? I know."

That's our story, and good god, I am verbose! 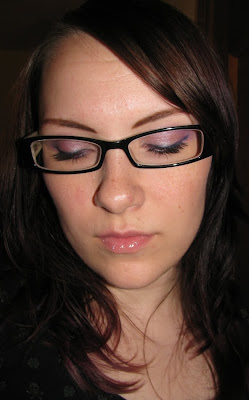 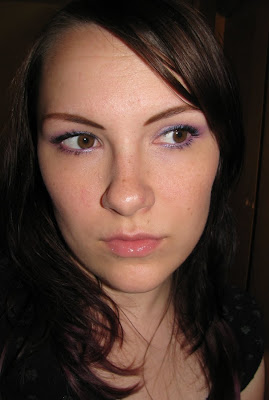 Very basic... just both of my lovely MUA eyeshadows from Robyn, my Almay purple liner, Maybelline Lash Stiletto mascara, and Mac Extra Amps on the lips.

Thanks for reading, especially if you read that novel up there!!

Wendy
Posted by Cydonian at 5:28 PM