You do not understand how crazy excited I am to bring you this review... many a beauty blogger have been after these bad boys for a few weeks now, myself included, and I FINALLY found them.

These are part of WetnWild's spring release, which includes new 3 pan eyeshadow palettes, a lash growth serum (testing that right now, actually), and new nail polishes. There was some speculation as to whether these items were permanent or limited edition.

This is going to be a long review, so if you just want swatches, feel free to scroll past my rambling. However, I'm going to go into some important details on these and also tips on finding them so if you're interested...

For finding them, I've set foot into no less than 10 Walgreens and had zero luck. I found one location that had the new 3 pans/serum/nail polishes, but it was a small cardboard stand. When I located these last night, that same cardboard stand was empty, and these were actually incorporated into an entirely new HUGE WetnWild section where their normal line stuff was. The new nail polishes had their own slots and labels, the cream eyeliners, etc. This location also had a Milani section, so that could be indicative that only the "full beauty counters" are getting them at this time (and it also says that it's possible your store will roll out the small display of 3 pans/nail polishes first, and then this reorganization will happen). I do not exaggerate when I say the section is now massive and at least 3 times the size it was previously.

Hopefully that helps you find them, HOWEVER... here is the bad news. As far as I can tell, the old 6 pans are discontinued (Lust, Greed, etc.). If your counter still has them and you've been eyeing them but on the fence... get what you want, because they will be gone once your store adds these new ones in. The location I went to had actually used the original display for the 6 pans to store these new 8 pans, and the 6 pans were nowhere in sight. This could be why Walgreens kept running 50% off sales so often these last few months... there was a renovation on the horizon.

NOTE (added 2/6/2011): I am not saying for sure that these ARE discontinued. I was simply noting that the locations I've visited so far do not have them in the new layout. I also noticed that the single eyeshadows were gone as well. The displays looked completed, there were no gaps, so while I'm not saying the company has officially discontinued production... Walgreens and other retailers may not stock the old with these new ones.

I will admit to thinking that their discontinuation is a bit of a shame. WetnWild had some of THE BEST mattes in the drugstore, and to me were honestly competing with high end formulas. I preferred their matte eyeshadows over Mac, Urban Decay.. you get the idea.

As far as I can tell, these are permanent, along with the new nail polishes and everything else you've seen from their Spring 2011 collection.

Anyway, stupid discontinuations or not, I've got these for you and they're pretty exciting. 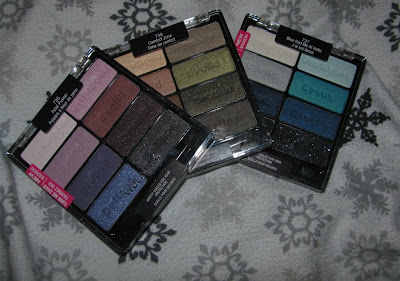 Now, I was originally only going to get the blue one... but I swear the other two jumped into my cart. It was a fight to the death, and they won.

All swatches in this post are done over Too Faced Shadow Insurance.

First up is Petal Pusher, the purple palette: 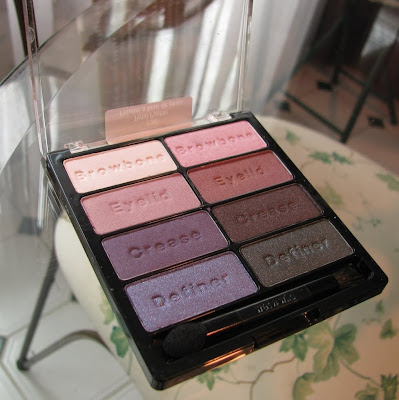 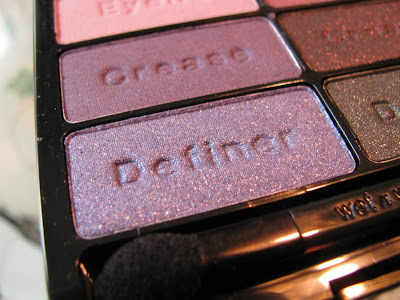 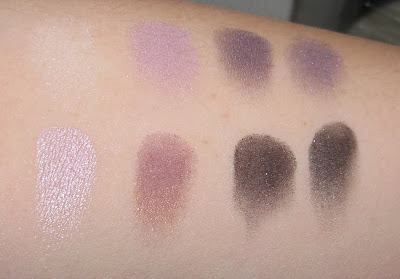 Out of the 3 palettes, this is the least pigmented. Most of the swatches were 2 swipes except for the deeper shades. I admittedly got this for a wedding I am attending in February, and doing the makeup for. I was eyeing a Rimnel quad but realized this had similar shades, more colors, and was less expensive so I went for this. It is very similar to the Sugar Plum Fairy palette from their Christmas release, with some colors from Lust thrown in (I'm doing comparisons in a separate post). Pretty palette (I especially like the shade on the bottom right in the swatch photo), definitely worth a purchase if you like purples, or want to expand your collection of them.

Next up is Blue Had Me At Hello (har), the blue palette: 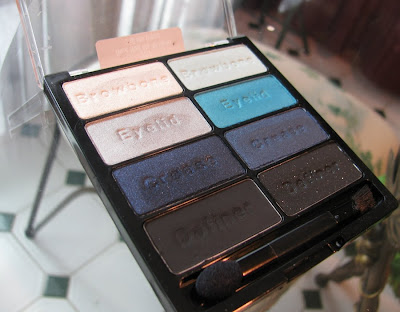 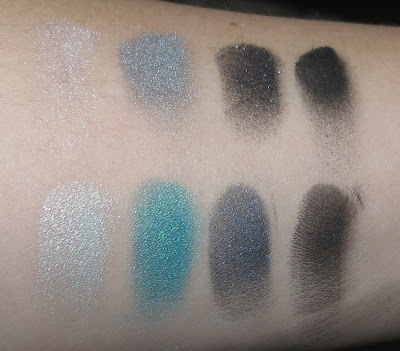 My only criticism of this palette is that it has a lot of dark shades. I like dark blues, but it would have been nice to have a couple of lighter shades... maybe a sky blue one? All of the palettes are split into two sides with a browbone, lid, crease and definer shade, so I can see what they were going for. The matte black is VERY pigmented and necessary as none of the other palettes have a matte shade. I think my favorite, however, is that teal. It is absolutely AMAZING, and totally unique. I can't think of another eyeshadow I own that is quite that tone... most teals lean blue or green (and turn pale when you swatch them) but this has a strong base and transfers so well: 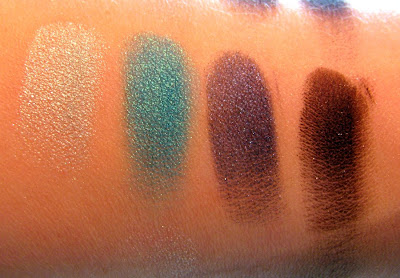 This is without flash, and I upped the contrast a little to help show the shimmer... even the color to the right of it is amazing in natural lighting!

For the price ($4.99), this one is definitely worth it... That teal is MORE than worth it, and I really love the pale blue above it in the palette. Again, very unique.

The last palette is Comfort Zone, the "neutral" palette: 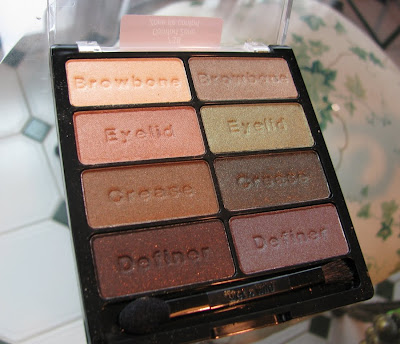 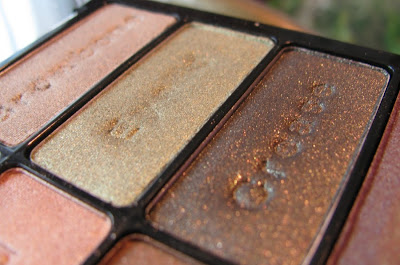 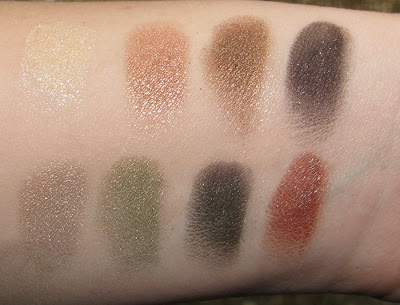 The colors in this palette are beautiful! I wasn't expecting this to be my favorite, but I think it is. The colors are unique, and well varied, so I feel like you get a lot of bang for your buck. I've not seen an olive like that from the drugstore... the pale taupe appears to be a dupe for Mac Dalliance (from the Peacocky collection), and the pale bronze is beautiful. If you can only afford one, go for this. 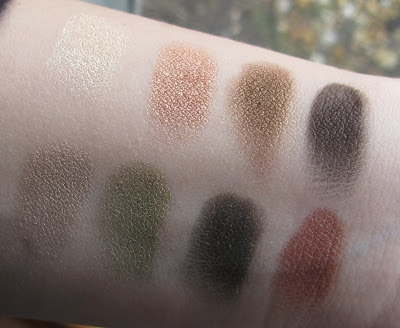 After all that, what can you really say? Even with Petal Pusher being less pigmented, it is still a lovely palette. The eyeshadows' formula is pretty consistent across the board, especially with those that are the same type. Comfort Zone's shades were particularly buttery and glided on.

I do feel like WetnWild is tossing a bit of it's unique flair by losing the matte shades, however. Among 24 eyeshadows, I've got one matte here, and it's a black. I will give them props for actually including deeper shades to define the crease with in every palette -- I see a lot of drugstore sets that have very flat colors, and you end up having to dig in your stash for something dark if you want that look.

I will do a post tomorrow comparing these to shades from the old 6 pans and the limited edition Christmas palettes, so stay tuned!

Which ones of these are you lusting after? Or have you already gotten them? Let me know!