Noooo, not me, silly! One of my dear friends!

I had the pleasure of attending my friend Amanda's wedding on Saturday and it was absolutely lovely! They did such a great job decorating and the location was beautiful. I will be sure to post the professional pics when I see them, if you guys are interested!

Anyway, I was one of her bridesmaids and she asked me if I was able to help with makeup. When I got there, I was tasked with doing eyes, lips and cheeks on two girls, and then her (the bride's) blush and bronzer... here's how everything came out! 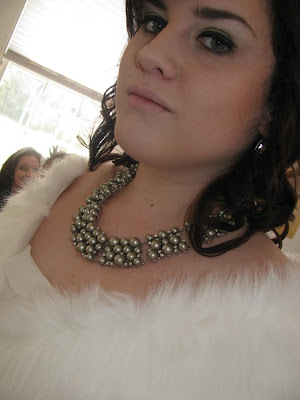 The first bridesmaid that I made up was Moriah. She had already done her foundation and eyebrows, and I set out to do something natural and effortless looking. She wears glasses, so I wanted her brown eyes to stand out without being over the top. So I went with very soft purple tones. 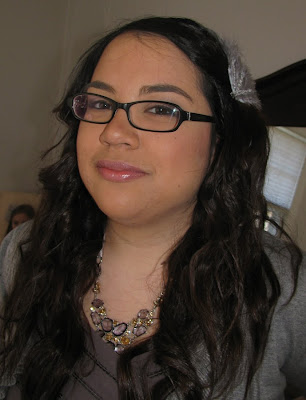 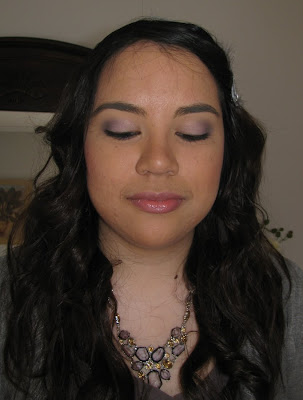 I used the shades from the WetnWild Petal Pusher palette, along with a little bit of e.l.f.'s single eyeshadow in Pebble in the crease. For her top and bottom lashline, I used Physician's Formula liners for green eyes (just the black shade, it has a little green sparkle).

For her cheeks, I used NYX Desert Rose blush.

On her lips, I used NYX round lipstick in Thalia with NYX Baby Rose gloss over top.

Next up was Questa. She has lovely blue/green eyes so I wanted to still incorporate purple (her and Moriah were both wearing purple dresses) but use more grey to intensify her eye shade. 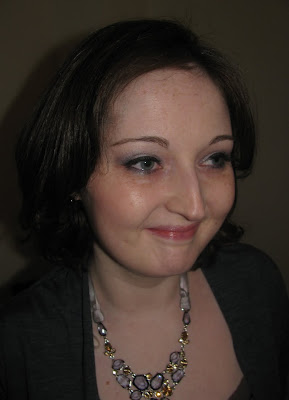 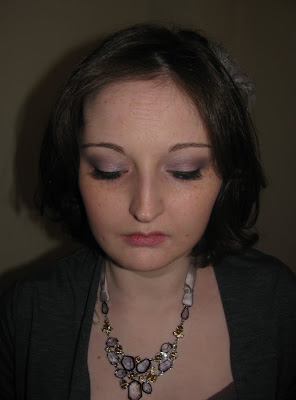 On her eyes I used Maybelline's Velvet Crush quad (all 4 shades). I also used MUA Shade 3 (grey pearl) to intensify the crease, and a little of the "Crease" shade from WetnWild Petal Pusher. I applied the purple liner from the Physician's Formula green eyes gel liner set on the lower waterline, and then the black shade on the upper lashline.

I used Ardell #110 false lashes, which were perfect and natural looking.

On her cheeks, I applied Hard Candy's Living Doll blush for a bit of glow.

Her face powder was the matte shade in Mac's Mineralize Skinfinish Natural in Light Shimmer. I used just a little of the shimmer side on her cheekbones to highlight.

I unfortunately do not know what was on her lips, she applied it herself!

Overall, I am really happy with how the makeup turned out and I think everyone (especially the bride) looked beautiful. Since I did my own makeup, guess you want to see that right? Wouldn't want to leave you guessing! 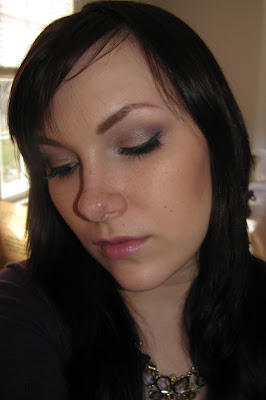 Crap photo but we were in a rushed tizzy all afternoon... on my eyes I used e.l.f. Cream Eyeshadow in Dawn as a base. Over top I used WetnWild single eyeshadow in Nutty and Kitten (lid and crease, respectively). I darkened the crease with a little bit of Make Up For Ever #92. The liner on both the upper lashline and lower waterline was Mac's Fluidline in Blacktrack.

False lashes were Ardell Accents #305 (which are bloody fantastic btw, so much more comfortable than full ones on me!)

On my cheeks I used Mac Prism blush as a contour, and Mac Prim and Proper as a blush. I added a VERY small amount of my MeMeMe liquid highlighter on top.

On my lips was none other than Mac Up the Amp lipstick (oh yes, the bride WANTED me to wear it =P) with Mac Perky lipglass over top.

If you're still with me, a little more about what we wore. I will have some full outfit photos later but all I had was a half mirror to take a photo with! 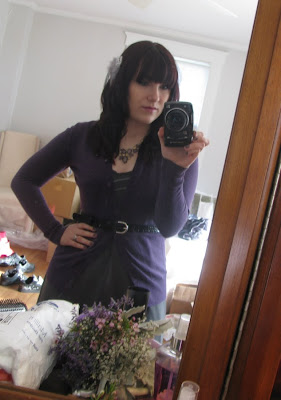 Feather hair piece made custom by the bride.
Necklace is from Francesca's collection (purple and topaz with ribbon).
Cardigan is from Target (slightly greyed purple).
Belt is black patent leather from Target.
Dress is grey with a sequined bust from American Eagle.