I know I have a blog and I rarely ever properly "blog" and just chat about things. This is more for my makeup so if you're not interested in my personal life at all, feel free to not read this :-).

If you read my last post or know me personally, I drove about 3 hours to see Ellie Goulding in Washington DC on Tuesday. My friend Amanda moved up there to be with her husband so it worked out, because she also likes Ellie and we could spend time together. So this is just a little rant in relation to that...

I started feeling like I was getting a cold over the weekend prior... just a bit of a sore throat, nothing bad. I felt okay on Monday sans a slight headache and Tuesday felt a little better even though my nose kept clogging up every couple of hours. We headed up to DC, I felt pretty much fine. Our plan was to meet near the venue after taking the metro into downtown (we parked in an outer area, you don't drive in DC =P). Everything was good until we got on the metro and I started feeling really nauseous from the motion, and my ears started clogging up. I think my ears being so clogged didn't help with my lack of coordination and that made it even worse!

At this point, my nose hadn't started running or anything yet so I assumed I just had some sinus pressure. Sure enough, while we were eating before the show, I realized I was wiping my nose every few minutes... awesome, I had a full on cold! Anyway, we went on to the concert and I was okay except being really tired (it was 10:45 at the end of the concert, I had been up since 6:15 on 6 hours of sleep, and drove all that way) and hearing a bit funny. The ride home on the metro set it off again and my ears immediately blocked up, my nose blocked up and my head started feeling like it weighed 10 pounds. We still had to drive about 25 minutes to get to my friend's house from the metro station we parked at! I felt so awful and tired.

If anyone is interested, here is a few photos and a video from the concert, I picked her most well known song: 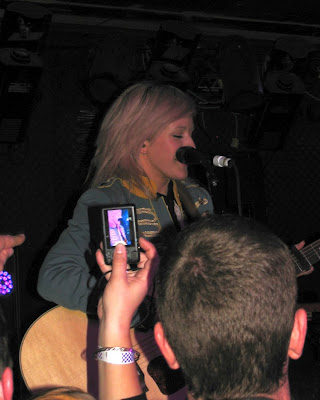 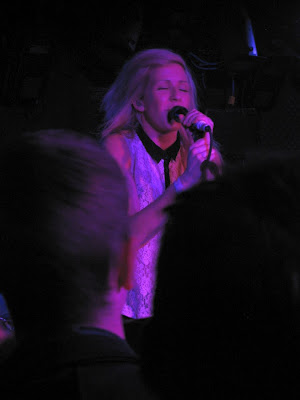 We woke up the next day and spent a few hours getting lunch and doing some shopping with Amanda. I was feeling progressively worse and knew we should head home but I also was so not wanting to drive. You know that feeling... anyway, I wasn't having luck with clothes or anything so around 4:45 we dropped her off and got directions on how to get home. I'm familiar with the interstates in Virginia but not with that area. Had I just been left to figure a way home, I would have gone towards DC and taken Interstate 495 down to 95 (basically the same way we came) and traffic would have been horrendous. Good thing we had Google Maps.

Google told us to take Route 28 to Route 234 and basically run parallel to the interstate and hopefully avoid some of the rush hour traffic. We were okay on Route 28 until we hit merge spots from other routes and it turned into a parking lot. We also started getting away from DC and into more rural areas, and thus started hitting stop lights. Overall, it took us over an hour to go about 20 miles. We stopped in Manasses at a CVS to get me some cold medicine because I was nearly dying at that point. I accidentally bought non non-drowsy and had to go back in and exchange it... seriously? lol!

From there it was pretty smooth sailing until we hopped on Interstate 95. It was going okay until about a mile down and then... more brake lights. At this point, I just wanted to go home. I think we lost at least another 30 minutes in that area... turned out it was an accident on the side of the road that had been there a while. Had we gone into DC and traveled south, I would imagine we would have been stuck even further back as I think we merged into the slow down when we got on the interstate.

I tried to make up some lost time after that, and my dad called to say there was a rain storm nearby, and we needed to be careful. We had been seeing lightning for a while so we were well aware. We had decided before we left that we were going to stop off of Interstate 295 to get food as we found a sushi place that was 50% off on Wednesdays... why not, right? Even though we got there much later than anticipated, we stopped and ate, relaxed for a while. I still wasn't feeling better but the food helped to get a boot in my ass and knowing we were only about 100 miles from home helped too.

We got back on the interstate and immediately the rain started. I don't mean rain so much as torrential downpour. I can honestly say that in my 23 years of age, I have NEVER seen rain this hard, ever. Bear in mind that I live in an area that gets hit by tropical storms and hurricanes relatively often (more often than I like!). I was going well under the speed limit (70 mph speed limit, in the rain, no thanks) and eventually a large pack of fast moving cars caught up to me and started passing, and were only splashing water all over my windshield. My poor wipers were moving so fast, and it wasn't helping at all. I couldn't pull over because I couldn't see the edges of the road... meaning I couldn't tell if there was a ditch or a guardrail, or just grass to pull over on. I basically just had to keep going. Turning my brights on was no help, it just reflected the light back at me and the road had a heavy fog look if I did that.

We were stuck in that for 45 miles. It felt like we had driven in it for hours, I was actually scared most of the time because it was a situation where I couldn't stop and it's not a good idea to hit your brakes too much for fear of hydroplaning. There were many minutes that passed that I was guiding the car by the tiny reflectors in the middle of the road, because I couldn't see ANYTHING else.

My husband recorded a video (I was driving haha):

Anyway, it finally calmed down and the last 50 miles of the trip were pretty uneventful, except that I was exhausted and wanted to sleep so badly. I was late coming into work today and still don't feel well, if it was possible that I could feel worse... I think I do.